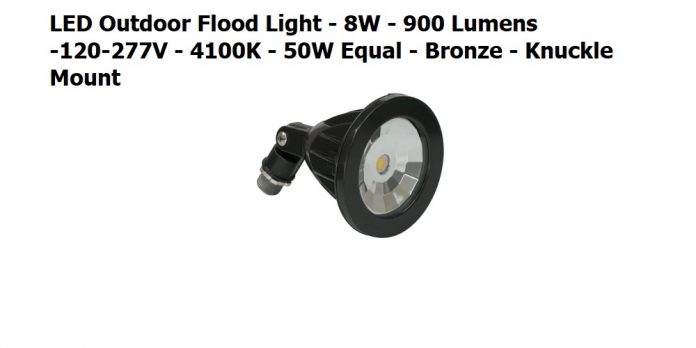 Using incandescent or sodium vapor flood lights for outdoor lighting is obsolete. However, while the faint yellow light produced by such lamps is adequate for basic sight, it isn’t good for safety. On the other hand, LED floodlights have superior security and safety functions.

When it comes to security floodlights, High-Intensity Discharge (HID) technology performs a great job of producing high-quality illumination. Still, it falls short in terms of both power consumption and light distribution.

The use of diodes rather than hot components is a major benefit of LED technology over HID. These diodes have more than 90 percent efficiency and produce bright, high-quality light, making them ideal for nighttime lighting.

Due to their low energy consumption, LED floodlights can save their customers a significant amount of money over time.

LED floodlights are efficient, but that is only one of their many advantages. LEDs are quickly replacing incandescent bulbs as the industry standard for outdoor illumination due mainly to having better visibility.

Below are the reasons why LED floodlight has better illumination.

High-intensity discharge (HID) flood lights are currently one of the most popular choices due to their powerful illumination. However, LEDs compare favorably.

Compared to traditional HID floodlights, which only manage 100 lumens per watt and gradually lose efficiency over time, modern LED floodlights can produce anywhere from 100 to 150 lumens per watt. This way, a 200-watt LED may generate up to thirty thousand lumens, which is more than enough for any business or factory.

Produces A Wide Spectrum of Colors

Low-pressure lamps and other older forms of artificial lighting technology only emit a single color of light, greatly reducing nighttime visibility. Compared to incandescent bulbs, LEDs provide light significantly closer to the color temperature of natural sunshine due to their wider spectrum.

The apparent warmth or coolness of light is quantified by its color temperature. The spectrum is displayed from one thousand to ten thousand Kelvin, with daylight spanning from three thousand to six thousand and five hundred degrees (daytime sun).

The CRI of LED lighting is also superior (CRI). The color rendering index (CRI) measures how accurately an illumination source renders colors. LEDs have a CRI of 90 or higher, which is still lower than the maximum value of 100 for sunlight.

Metal halide lamps can achieve a CRI of up to 60, whereas high-pressure sodium and fluorescent lights top out at 65. High-intensity discharge lamps (HID) can get to 90 or higher, although their light quality declines with time.

You can enjoy the many benefits of LED flood lights if you work with a reliable electrical contractor. Meeting clients’ expectations is not easy, particularly when it comes to budget and strict specifications. But it is possible to choose the proper lighting and the best contractor. Enhance safety and reduce overhead with cutting-edge LED lighting and control systems.

How to choose affordable yet great melting furnace

Understanding The Role Of Filled Teflon In Different Industries

How to Appeal To Prototype Manufacturing Companies

Stay Up to date about your e-bike batteries